Already to Chemo Round 2! 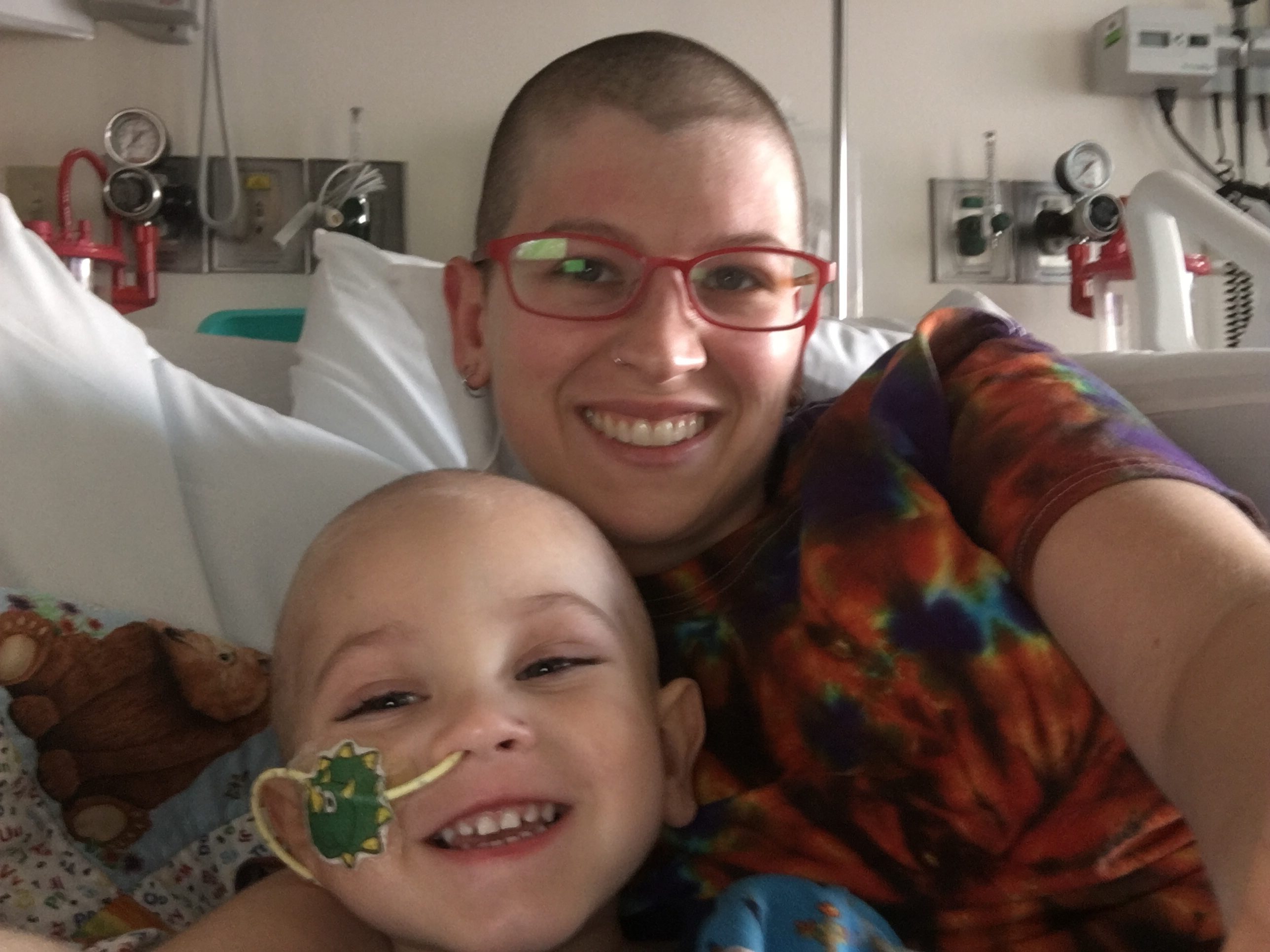 Wow, there is so much to do and keep up with and I didn’t even work at all this week. I got lucky and had a few hours the first two weeks of January due to sick calls and holiday vacations, but that’s it.

By the time we go “home” (based on when they say we’ll go) we’ll have been in hospital for at least 28 days this time!

On Friday 1/18/19 Uriah started his second round of chemo. So far he’s been tolerating it pretty well. He had some nausea and vomiting last night, but, seems to be doing ok today once we backed off on his nasal tube feeds.

What else has been going on over the last almost two weeks? Jeeze, it feels like so much.

Scroll to the end for photos!

There are a few major things:

Zero: He started to lose his hair so we shaved his head. And then I shaved mine! Glen already shaves his, so now the whole family has “scratchy heads”!

One: He’s off the TPN (for now). That’s the IV food. He was doing well enough on his nutrition and taking the nasal tube feeds well, that they decided to back him off that. He’s now just getting his nutrition from his nasal tube and “snacks.”

His appetite has been increasing a little bit every day (though mostly for junk food, but we’ll take it). We’ll see how that holds up as it did kind of go away on day two (today) of chemo.

Two: He’s nearly weaned off pain medication for now. He was on pain meds long enough, that they did need to start a wean off. He’s on a really low dose and I think his wean will take about another week.

He doesn’t seem to be having any issues weaning off the pain meds. We’re really hoping that means the tumor is shrinking a bit and the chemo is starting to do it’s work.

Three: He’s also off his blood pressure meds! That’s also a really good sign that the primary tumor is shrinking. We didn’t realize it, but apparently the tumor had pushed his left kidney all the way down into his pelvis. That pressure on the kidney wreaks havoc on the blood pressure.

They can’t promise that this means the tumor is shrinking, but, it’s a good sign.

So, come to think of it, he’s basically off all the meds except what he needs while in the hospital, his pain med weans, some antibiotics everyone needs while on chemo and meds to make sure he poops (also an issue while on chemo)!

Four: He’s medically stable enough that after we finish this next chemo cycle on Monday, we’ll be going “home” that evening or the next day (depending on how he’s doing).

What does going “home” mean?

We don’t exactly know. But, it feels like we’ll be sticking close to the hospital longer and more often than we intended.

We have a reservation at the Ronald McDonald House starting on the 25th, and we’ve also had an extremely generous offer from the family of a friend to use their caretaker cottage, only about 5 minutes from the hospital.

So, I guess we’ll keep figuring it out day by day as we have been doing so far.

Why going home is so hard when you live far away:

The way this is all supposed to work, he doesn’t “lose” his immune system until 7-10 days after we start a chemotherapy cycle. Of course, it’s already pretty low right now, but at least he does have an immune system of some kind.

So, just after a chemo cycle is the ideal time to go home. But, he had pretty bad nausea for about 2 days after the last chemo cycle, even with medication.

We don’t feel right putting Uriah in the car-seat for three and a half hours each way if he’s not feeling great. As it stands, this first trip would just be a trip home to clean up and assess everything as we left in such a hurry.

And, this week we have these two items to contend with right after leaving: a sterile dressing change for his central line on Wednesday and a 3 hour outpatient eye exam on Thursday. Plus, he’ll have physical therapy 2 or 3 days a week ongoing (and other outpatient follow ups, like hearing exams regularly, etc).

I think to get the kind of physical therapy he would need we would need to drive to Corvallis, about an hour and a half from home. Now, on a rare occasion we wouldn’t mind skipping PT for a week to get home, but, generally, given all the other reasons to stay close to the hospital, going home with that kind of schedule just isn’t practical. We’re not going to spend 3 hours in the car 2-3 days a week plus whatever else gets put on our plate…. and, when is a parent supposed to work during all this?? Just sayin’…

Why we would really like to get home right now:

Since we left on Christmas Eve, and in a hurry, we expect to come home to a bit of a mess. Our presents are still under our tree- which is likely a pile of needles on top of said presents.

The house is questionably clean. The fridge might be a bit scary. And of course, we had just made one of our quarterly Costco trips before we came so I have no idea what the status of all those groceries is. And so on and so forth.

We still don’t have a long term plan for our chickens. Most likely, we’ll try to sell off the flock if we can (every dollar counts right now!) and look at other options if that’s not feasible. But it would be good to check them out and make sure they’re doing ok with the plan we put in place for now.

We’d like to maybe visit Hank and see if we can get a better plan in place for him. The lucky guy has had a few drop in visitors at the kennel and gotten at least a little bit of extra attention while we’ve been gone. And those generous friends have offered to keep visiting him while he is there as well as try and come up with some options for regular dog sitting.

We’ve had a number of offers for way to help with Hank, but they all feel a little hard to coordinate unless we can be there in person to discuss the situation. So for now, I guess, we’ll keep him at the kennel because there are too many other pressing things.

Planning for a Birthday!

Usually we’re pretty low key for holidays and birthdays, but, I want to make his third birthday special.

Still trying to figure out what that’s going to mean. He can’t swim, and probably can’t be in a large crowded place due to immune suppression. But there’s a good chance we’ll be in Portland and that could mean some opportunities that aren’t usually available. We’ll probably try to do a low key birthday at home, sometime, with his baby friends too.

How we’re all holding up:

Better than you’d expect, I think? I’m surprised at how resilient we all are and how well we are all doing with these stresses as a family! A stress like this can rip a family apart, but, so far, gladly, it’s done nothing but bring us tighter together and get us cooperating better.

Uriah is doing so much better in so many ways. He’s attitude and demeanor have improved dramatically. He’s practically back to his normal self.

Of course, he’s having some anger and outbursts. All very age appropriate, I think, especially given the situation he’s in.

He does understand that he was sick. I know this because when we first disconnected his IV food he told us “I don’t want to take the tubies (tubes) off, because they make me get better.” Amazingly insightful and heartbreaking to hear.

Of course, this week, he’s been feeling better. And now we had to contend with him telling us he wants to “take all the tubies off because he’s happy and he feels better and he wants to go home.”

Some of the most frustrating parts of this as a parent of a toddler are that just when he starts to think he’s feeling better, we hook him up to “tubes” and make him feel sick again.

Also, as a parent, it’s really hard to wrap your head around seeing an improvement this strong, but knowing that it’s not predictive of an overall trend, or that it means things are going well in the big picture. Only time will tell that.

It really teaches you to appreciate each moment and live in the moment.

Some very generous people, some we know and some we don’t, have offered to help and are getting a fundraiser and dinner together for us back home. We won’t likely be there (I think he starts the 3rd chemo cycle the day before it’s planned). It’s nice to have the backing of people we’ve never met. They also put up a fundraiser on Facebook.

We’ve raised some money through the PayPal links and in the “how to help” section of the website I included links to Amazon. If someone goes to Amazon by clicking our link and then shops as normal, we make a tiny bit of the sales price! Not much, but it’s free, so please, find that to do your Amazon shopping!

We’ve given in to the fact that now is the time to accept any support offered. Gifts, swag, money, free massages (lol, sleeping in the hospital is hard on an adult body!).

Though we prefer cash, because we can try to be quite frugal in how we spend it, we understand that’s not always the way people are able to help. So, we’ll accept however people wish to share, if they feel they want to.

I also have to recognize that because we’re so smart and frugal with money, we’re really only going to spend on necessities. Many have reminded us to “take care of ourselves” but, this doesn’t seem the time to spend on things that don’t seem totally necessary. So, we could, in theory, be forced by sending an item etc. if that makes sense!

5 thoughts on “Already to Chemo Round 2!”