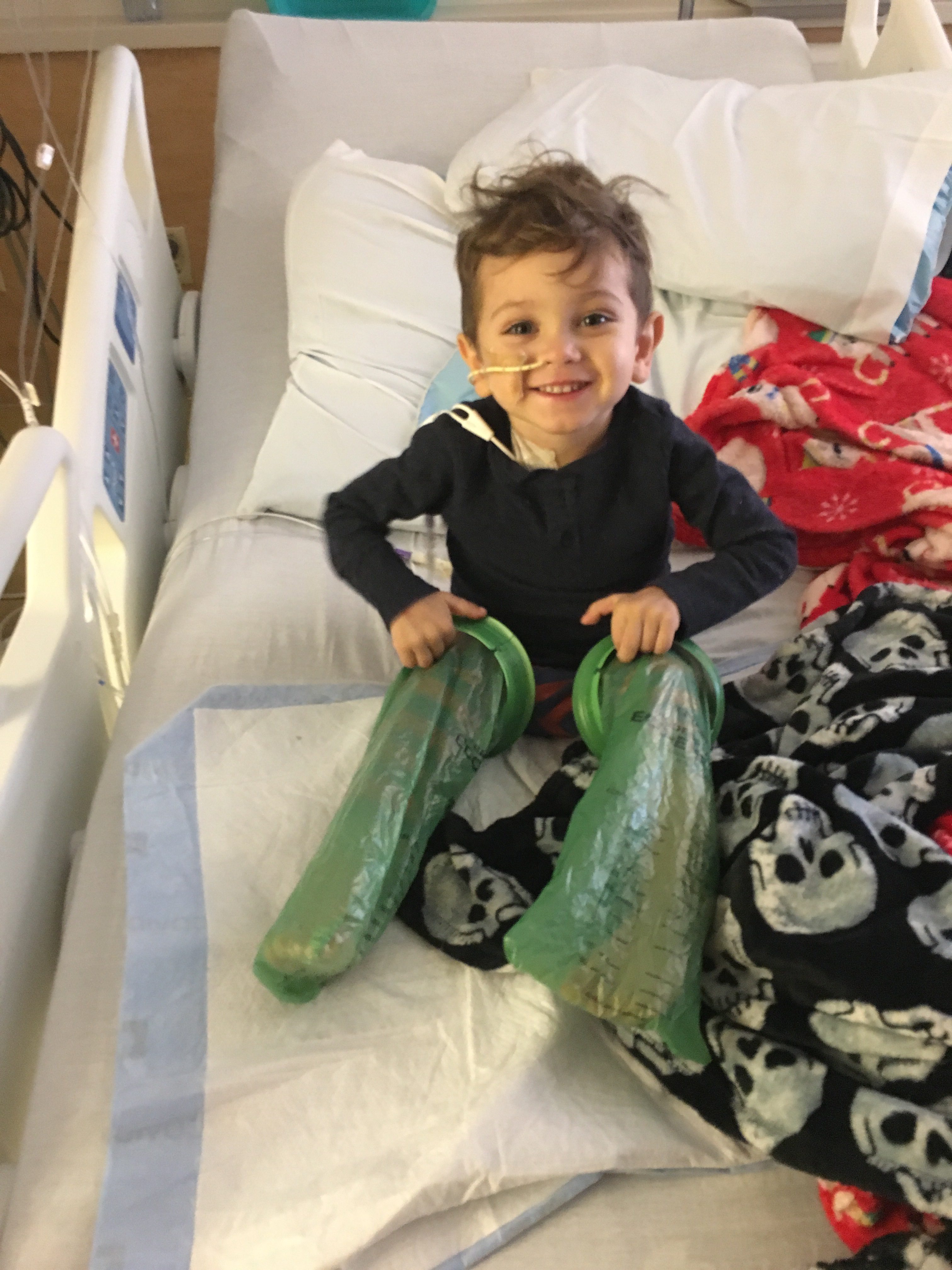 It’s hard to believe that it’s only been twelve days since we ended up in the hospital.

We, and Uriah are doing as well as can be expected, I guess.

Uriah came in so malnourished due to his inability to eat, coupled with the fact that we we’re told “not eating is normal” with the intestinal infection they thought he had, he’s needed some extra support. So he was pretty quickly placed on TPN, or “IV food.”

Uriah has been through a CT, and MRI and a surgery to place his central line. He’s had TWO blood transfusions and will have another one tomorrow.

He was also put on an NG, nasogastric, tube to allow us to try and feed him formula through it and keep his gut stimulated and hope to wean off of the TPN.

Chemo went as well as we could hope I guess. He had some pretty bad nausea that we worked to get under control with medications.

He’s also been put on around the clock pain medication drip.

He has up days and down days. He’s been started on physical and occupational therapy, which he will need to have ongoing.

Because he was so malnourished coming in, he’s both been weak, but also a bit de-conditioned- muscles are forgetting how to work right because he hasn’t had to use them.

But, he’s also having some nerve related side effects from the chemo giving him “foot drop” where he has trouble coordinating his feet movements. This coupled with pain and weakness make it pretty hard for him to walk right now.

There’s been so much going on it’s really hard to keep track. The days drag together into the nights and so on.

Friday we got the unfortunate news that his genetic testing came back and he has the most aggressive, hard to treat genetic variant of neuroblastoma, “MYCN.”

And, to round off our excitement, TODAY we were placed in isolation.

Uriah has had a fever on and off since this all started nearly a month and a half ago. It cleared some of the days in the hospital but has been up and down.

We think that it is likely due to the dry hospital air and an irritated throat from procedures and NG tube placement, but, he’s had a dry cough for a few days. Couple this with fevers – perhaps disease related, perhaps neutropenic fevers of unknown origin… well, they decided they can’t risk that he does have something and gives someone else on the unit whatever he got.

So, he can’t leave his room. This is sad for him as one of the few things he was enjoying was riding the tricycle for a few minutes a day and a trip to the art room now and then.

For Mama and Dad, we can leave the cancer unit, but we can’t be anywhere on the unit but his room. This means we’ve also lost access to the family pantry where we have kept our food stores.

The staff say they are happy to go get us something or warm something up, but as we eat “real food” that’s not really practical. I don’t think nursing staff is going to dig through our bins of food, pull out fresh bread, meat and cheese and mayo and slap together a sandwich.

And, once food comes into our room, it can’t go back out. So they can’t bring us our supplies and then take them back either. We may have to suck it up and spend some money (or take up some of the offers) to have some food delivered. We’ll have to chock it up to unexpected hospital costs I guess.

It’s sounding like there is a strong possibility we will stay admitted through the next round of chemo in the third week of January. We might get placed outpatient for a few days depending on how he is doing, but there are still enough issues that they just can’t tell us much and we continue to take it day by day. If we go outpatient we’ve been approved to go to Ronald McDonald House as somewhere to stay near the hospital as it wouldn’t be practical to go all the way home and there will be tests and PT etc.

We’re still trying to figure out what to do with our dog Hank. He’s being boarded at a kennel back home. We feel bad about that and the quality of life for him.

We considered looking for a foster family, but, I think having Hank around will be important to recovery for Uriah. So now we are trying to figure out a group of people at home who can maybe take turns watching Hank. That’s harder than for some dogs as he is an “only dog” questionable around others, though great with people. He also is used to sleeping on the couch but being able to go out when he wants and having a fenced yard as he’s bolted before.

We’ll see what we can figure out.

That feels like the briefest overview of that last 12 days, but it’s all I can muster.

Thanks for your continued support and well wishes.

To those who have donated to Uriah, I can’t thank you enough and hope you understand if I don’t have to time or energy to get around to thanking everyone personally. You are all angels.